Romance is in the... Cave? Unique Wedding Proposals at Bridal Cave

July 27, 2016
Bridal Cave is know for being one of the most unique wedding venues in the Midwest. To date, there have been over 3,300 weddings performed at Bridal Cave & Thunder Mountain Park. That's not the only romantic things that happen here though.

More than 10,000 couples every year visit us while on their honeymoon, and over 1,000 couples come back on their anniversary each year to visit the place where they exchanged their vows. Weddings take place in both our underground wedding chapel and outdoor covered lakeside pavilion.

Our Lake of the Ozarks scenic attraction is also home to some wonderful and creative wedding proposals! If you didn't think a cave could be a romantic spot, these memorable stories will prove you wrong. 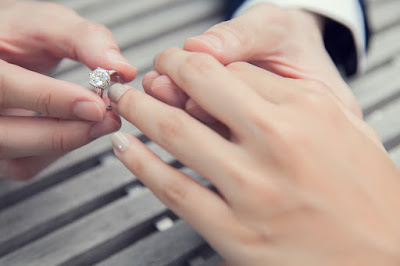 Diamonds in the cave?

On one of the routine tours through Bridal Cave, a gentleman asked the guide if there were any diamonds found anywhere in the cave. Just as the guide was about to explain that no, there were not... his friend announced that he had found one! The finder (who turned out to be the best man) handed his friend (the soon-to-be-groom) a diamond engagement ring. The man then dropped to his knee and made the surprise proposal in front of the entire tour group!


They're playing our song!

Another groom-to-be got the bride-to-be's family involved. He put some major planning into this one. The group made arrangements in advance to have our underground bridal chapel inside the cave set up for this grand proposal.

Under the pretense of a family boat trip to Ha Ha Tonka, one of the family members conveniently mentioned that they had never seen Bridal Cave, and maybe it would be worth stopping for a tour. This turned out to be no ordinary cave tour.

The chapel was entirely lit by candlelight, champagne was waiting, and the couple's favorite song was playing in the background. As they entered, the soon-to-be-bride stated how beautiful the room was by candlelight and what a coincidence it was that the music playing was their favorite song. When she turned around, her fella was on one knee, with the entire family surrounding him, and he asked for her hand in marriage.

We wish we had some photos to share with you of those two romantic proposals, but we did capture the latest one. Just this week, another young lady was surprised on the boat dock at Thunder Mountain Park. We couldn't hear the conversation from that far away, but boy, it sure did look amazing. 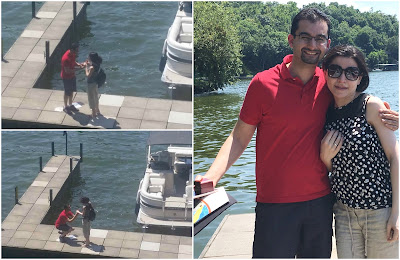 While there are no guarantees in life, to the best of our knowledge, no proposal has ever been refused that took place at Bridal Cave & Thunder Mountain Park. So gentleman, if you've been considering asking her, we've got lots of beautiful spots to pop the question! FYI- August is Romance Awareness Month, and March 20, 2017 is National Proposal Day. It's never too early to plan ahead, and it's always a comfortable 60 degrees inside the cave, even in March.

Thanks to these stories, we can truly say that our popular Lake of the Ozarks attraction is one of the most romantic places in mid-Missouri.