March 17, 2016
Here at Bridal Cave & Thunder Mountain Park there is always something new to see and learn, even for us! We had our wedding bell refurbished recently and found out that is was one of the very first bells ever made by the C.S. Bell Company in 1875. Next week we'll tell you all about the story of our Lake of the Ozarks wedding chapel's bell, but today we would love to share some interesting information about the company that created it. 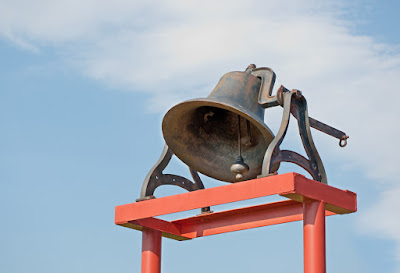 The C.S. Bell Company was founded by Charles Singleton Bell. He learned the foundry business from his uncle, Alexander Bradley. After working in a few different foundries, Bell began his own company in Hillsboro, Ohio in 1858.

This new company had only 2 employees. It started out producing tons of pig iron, and later began manufacturing many different items: Mogul stoves, caboose stoves, coffee hullers and pulpers, plows and garden rollers, and more. They did not start producing bells until 1875.

In that first year of bell-making, over 1.000 units were sold. The company steadily grew, and they sold 20,000 units in 1890 in 15 different sizes. These were categorized into two classes: farm bells, which varied in weight from 40-100 pounds, and school and church bells, known as "steel alloy bells," that weighed 150-1,000 pounds.

Bell was on a mission to find an alloy that was more affordable to produce than brass, but more durable than iron. His experiments yielded many failed attempts, but eventually he succeeded. The alloy that he discovered could be pitched to create a very mellow tone. This tone along with the durability of the alloy made his bells famous all over the world.

Every year the city of Hillsboro, Ohio celebrates the "Festival of Bells" near the Fourth of July. This festival is an outgrowth of a successful 1976 bicentennial celebration of the founding of our country. The name was given to this annual event to honor the town's heritage as a major bell producer. 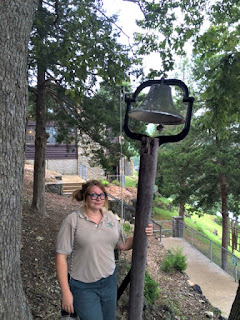 Bridal Cave has it's very own C.S. Bell Company bell, which we use for our wedding bell. It was in need of a good cleaning, so we sent it out to be refurbished. While this blog is being written, our bell has been crated and will be leaving the warehouse soon. We plan to have it reinstalled by the first of next week.

Along with our wedding bell reclaiming its spot at our Lake of the Ozarks natural attraction, next week we will tell you all about our very own bell's colorful history. The story of getting it back to its original condition is quite intriguing. We hope that you all take some time to stop by and see it for yourself.