March 08, 2019
Missouri has an abundance of caves which gives us our name, "The Cave State!" With 18 show caves and over 6,950 wild caves, it's no surprise that we got that nickname. Caves come rich with history and are such a great way to have fun with your family getting back to nature. Today our family attraction at the Lake of the Ozarks would like to share with you some of the great Missouri Show Caves to add to your bucket list!

Of course, if you've never been to our cave at the Lake of the Ozarks you'll want to add it to the top of the list! Bridal Cave is one of America's most scenic caverns due to its formation packed cave. You'll be hard-pressed to look in any direction and not find gorgeous draperies, soda straws, huge columns, stalactites, and stalagmites! Bridal Cave is located in Camdenton at the beautiful Lake of the Ozarks!

In addition to a great cave to visit, Bridal Cave is also a popular and unique place to get married! Bridal Cave gets its name from an old Indian legend and we still continue their cave wedding tradition performing over 3,600 weddings! 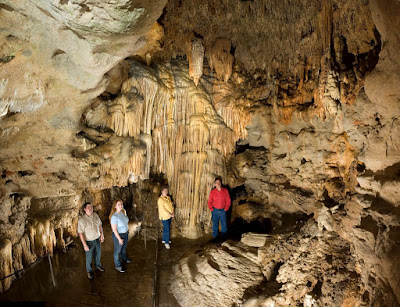 It was 1925, in a limestone outcrop, that Bluff Dwellers Cave was discovered by Arthur Browning, owner of the property, and two surveyors, Bob Ford, and Bryan Gilmore, employed by the highway department. The exploration begins! Excavation began from a small head sized opening. It became apparent that there was a network of subterranean corridors channeling the layers of rock like a subway system. Two natural openings were found that had been hidden by hillside talus and slabs of rock weathered from the bluff face over several thousand years. However, these were not the first men to set foot in these caves. Two years later, in 1927, Bluff Dwellers Cave was opened to the public for tours. The cavern is still owned by descendants of the original Browning family. you can take a tour of Bluff Dwellers Cave March through October from 9:00 am – 5:00 pm; November through February from 9:00 am – 4:00 pm. The last tour is 30 minutes before closing. The Cave is closed Thanksgiving and Christmas.

Cameron Cave is located in Hannibal and was discovered in 1925 by the owner of Mark Twain Cave, Arch Cameron. Mr. Cameron was checking on his cattle on a cold February morning and noticed steam coming from an unusual area. He began prodding with a long stick to discover that there was no bottom. He went back to organize an exploration party. A few days later the men enlarged the sinkhole and crawled in and discovered a cave much more complicated than Mark Twain Cave. Cameron Cave has twice the passages on half the property. This cave remains the same as it was when it was discovered with the exception of only a few safety regulations to make the cave safe for tourism. You'll have to make a reservation to take a tour and it's only open Memorial Day-Labor Day. 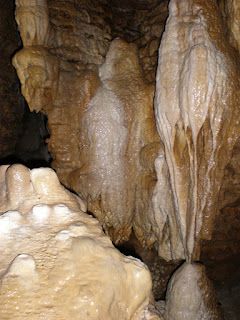 Cathedral Cave is located in Leasburg, 15,639 feet long, and the trip from the river entrance to the commercial entrance is about 5,600 feet. The remainder of the cave consists of a few side passages and the portion known as “Upstream Cathedral,” which was not mapped until the 1970s, due in part to its own characteristic of being intermittently “detestable.” Most, if not all, of Cathedral Cave, is hollowed in the Gasconade dolomite, which was laid down approximately 440 million years ago. The cave consists of two distinct sections: a dimensionally larger and presumably older passage with its entrance high on the campground valley hillside; and the much longer, narrower, younger and lower (both in passage size and elevation) cave stream passage, which intersects the stream at right angles near the Cathedral column – the premier speleothem in the cave. This is a lantern tour that lasts approximately two hours. The tour begins at the campground shower house and includes a short one­ third mile walk up Deer Run Trail to the cave’s entrance. The cave tour itself lasts about an hour and 30 minutes. The remaining time is spent traveling on the trail to and from the cave entrance. The cave temperature is 57oF (13oC). The tour is limited to the first 30 people. It is more strenuous than the Onondaga Cave tour and covers one and two­ thirds miles round trip. 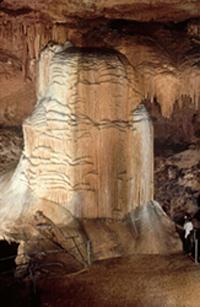 Current River Cavern is located in Van Buren, formerly called “Big Spring Onyx Cavern,” is exceptionally well decorated with a wide variety of natural cave formations. A year-round stream flows through the tour passage beneath the boardwalk and a small waterfall can be seen flowing from a side passage after heavy rains. The temperature inside the cave is a cool 58°F year round, very nice on a hot summer day. Cave Spring Park is located just west of Van Buren, Missouri on US Highway 60, adjacent to the Eleven Point ranger district of the Mark Twain National Forest. They currently offer a number of exciting activities and attractions including cave tours, zip lines, a museum & nature center, gem panning, a gift shop and a quarry dig (where you can take home real fossils, geodes, & crystals). Park passes are available and include the cave tour, museum/nature center, gem or fossil panning, quarry dig, and a souvenir photo. 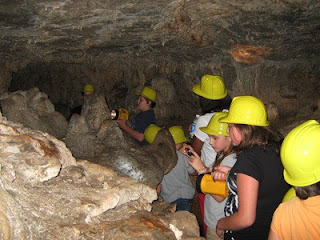 Fantastic Caverns, just northwest of Springfield, MO, and is famous for being the only riding tour in the state!  Because the beauty of Fantastic Caverns is vulnerable, the Cave is toured in jeep­ drawn trams. When visitors board the comfortable jeep­ drawn tram for the 55 minute tour of America’s ride­ through cave, they begin a journey back in time. Since you ride all of the way through, you experience the magnitude, the stillness, and the splendor of Fantastic Caverns while preserving its natural features. Fantastic Caverns offers a variety of educational opportunities for students of all ages and group sizes. Because the Cavern is a ride through adventure it is definitely a fit for people of all ages and capabilities. Fantastic Caverns is open daily throughout the year except for Thanksgiving Day, Christmas Eve & Christmas Day, from 8:00 AM to “dusk.” 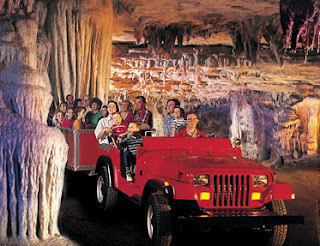 Located in Sullivan, Fisher Cave is truly one of the park’s most spectacular natural wonders. Located in Meramec State Park the cave offers Naturalist­-led tours. These tours are offered on a seasonal basis, provide an interesting adventure for park visitors. From the low, narrow stream side passages to the huge rooms filled with calcite deposits, Fisher Cave offers one outstanding cave scene after another. Inside these rooms and passages are well­ preserved bear claw marks, cave wildlife and a vast array of calcite deposits ranging from intricate hellectites to massive columns 30 feet tall.

Jabocs Cave is located in Versailles - Lake of the Ozarks. They offer fully guided walking tour is conducted in an environment that remains a constant temperature of 53 degrees. This site is founded in nearly a 200-year-old history and it has been available to the public for viewing for the last 82 years. Jacob’s Cave provides a variety of events throughout the year. Famous for both their natural beauty and being completely wheelchair accessible! 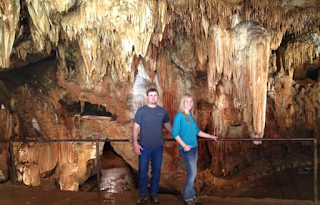 Caving is a great way to enjoy nature in a fun and educational way! At Bridal Cave, we encourage everyone to see as many show cave's in Missouri as possible because every cave you visit has a different history and it's own unique scenic beauty! Our attraction at the Lake of the Ozarks is open year-round but you'll want to make sure to check with the cave you plan to visit to make ensure they are open for tours. Stay tuned for next week's blog because we will be featuring even more great Missouri Show Caves to add to your caving bucket list!