January 17, 2017
Our Lake of the Ozarks family-fun attraction isn't the only cave tour to enjoy in Missouri. Last week our blog, Show Caves to Visit in Missouri - Part 1, featured eight exciting caves full of natural wonders in addition to Bridal Cave. This week's blog continues that look with seven more show caves that help to give our state it's nickname of "The Cave State."


Round Spring Cave
This cave is a part of the Ozark National Scenic Riverways, one of our national parks located in Van Buren. During the summer months, park rangers take up to 15 people at a time on this 2-hour, somewhat strenuous cave tour.

Current River Cavern
Also in Van Buren, you will find the cave formerly known as "Big Spring Onyx Cavern." There is a year-round stream flowing through the tour passage below the boardwalk, and after heavy rains there is a beautiful small waterfall to enjoy flowing from a side passage. The entire cave is lit by battery powered LED lights that give off a restricted light spectrum. There are flashlights available in the gift shop to borrow and use during this 30-40 minute cave tour.


Fantastic Caverns
Springfield boasts America's only ride-through cave. Visitors take the tour in jeep-drawn trams. This helps to preserve the natural features of the cave while allowing you to experience the magnitude, the stillness, and the splendor. Each tour lasts about an hour, and they depart every 20-30 minutes all year long.

Smallin Cave
Just south of Springfield in Ozark, you will find Smallin Cave. There is strong evidence that this particular cave was used for war related activities during the Civil War, and they even offer a historic Civil War Tour which includes a lantern -lit walk through the cave. The regular 1-hour, half-mile cave tour is given year-round. Guides will tell you all about the history, folklore, and geology of Smallin Cave, and you may be lucky enough to see rare bristly crayfish, endangered blind cave salamanders, and various species of bats.

Marvel Cave
Silver Dollar City in Branson features Marvel Cave. The theme park actually evolved around the entrance to this show cave which can be toured seasonally March 15 - January 1. The trail in this hour long, wet limestone cave tour consists of ramps and nearly 600 stairs. A trained guide will host your journey with anecdotes of historical and geological features. After descending nearly 500 feet below the earth's surface, a unique cable train will bring you back up.

Talking Rocks Cavern
You will find this incredible cave in Branson West. It was first named "Fairy Cave" by early cave developer Truman Powell because he commented that it looked like "a subterranean fairy land." In 1969 the name was changed to Talking Rocks Cavern based on a quote from Truman's son, Waldo Powell, who noted that the physical evidence inside the cave would tell him a story about how it was formed. The hour long tour is both fun and educational (what they call "edutainment.") You will see and learn all about the cave's discovery, history, mineral deposits, and other geological information.


Bluff Dwellers Cavern
This show cave in Noel was discovered in 1925, and it began from an opening only as large as a person's head. A network of subterranean corridors were found channeling through the layers of rock like a subway system. Public tours began just two years after the cave's discovery, and today descendants of the original Browning family that discovered the cave still own it. You can experience this show cave year-round, witnessing its Crystal Dam, Musical Chimes, Balanced Rock, and much more. 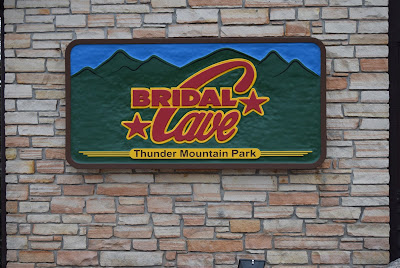 If you have had the chance to visit our scenic Lake of the Ozarks attraction, then you have some idea about the wonders that are in store for you when you visit the rest of Missouri's show caves. While similar, each of these has something unique to see and learn about. Bridal Cave is a great place to start your adventure, but we hope that the information in this blog series inspires you to keep exploring all of the wonders of our magical cave state. This type of outdoor activity is family fun... as it should be!