Predict The New President With Our Annual "Underground Opinion Poll"

September 21, 2016
The presidential election is on almost everyone's minds right now. It's an important decision for the American people, and our Lake of the Ozarks scenic attraction is getting in on the action by holding our own opinion poll. 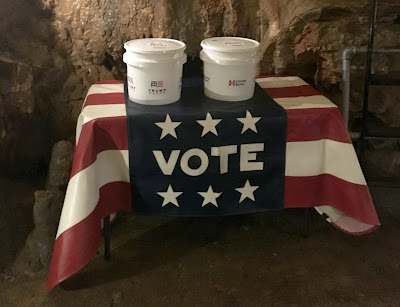 In 1960, former Bridal Cave & Thunder Mountain Park manager Eddie Miller began what has now become a tradition for us. The "Underground Opinion Poll" is our unofficial way to predict the outcome of the Presidential election.

On each and every tour of Bridal cave, guests are asked to vote for the candidate of their choice by using their ticket stub as a ballot. One big difference with our poll is that there is no age limit. If the kids want to take part in this example of democracy, they are more than welcome to join in the fun.


We will tally the votes on three different occasions: September 30, October 15, and a final count will take place on November 1 before the real November 8 presidential election. While our numbers aren't the ones that will decide who will be the next president of the United States, there's a very good chance that our prediction will come true. 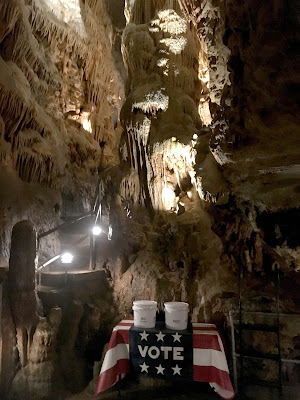 Bridal Cave attracts people from all around the world, and due to the wide diversity of guests from all over the U.S.A., "The Underground Opinion Poll" has become a very accurate barometer of the Presidential election outcome. There have only been 2 elections where our poll did not predict the winner since we started this poll in 1960. In 1972, it even predicted the exact percentage of the popular vote!

Fall is a beautiful time to visit Thunder Mountain Park, and Bridal Cave is always gorgeous and a comfortable 60 degrees, no matter what time of year it is. Stop in for a scenic cave tour and take part in our 2016 "Underground Opinion Poll." It's all in good fun, and it's a great way to introduce your kids to the voting process.

**Update 11/1/16: The final results of this year's Underground Opinion Poll are in, and according to our visitors, the prediction is for Donald Trump to be the next President of the United States. He received 64 % of the votes to Hillary Clinton's 36%. We can't wait to see how the real election turns out. Don't forget to vote!