May 31, 2019
One of our favorite holidays at Bridal Cave is coming up very soon - National Caves and Karst Day! June 6th, 2019  is an entire day dedicated to raising awareness of the crucial roles both caves and karsts play in our lives and encourage people to get out and visit a cave! See what the National Caves Association has to say about National Caves and Karsts Day below in a press release that they published! 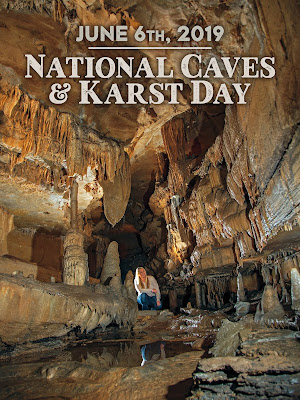 The National Caves Association, which represents 90 show caves in the United States, Bermuda and Barbados has declared June 6 as National Caves and Karst Day to increase awareness of the roles both play in our lives and the environment. This year, 2019, marks the third year for this special event.

According to www.CavesLive.org, which is sponsored by the USDA Forest Service and Prince William Network, caves, and karst make landscapes diverse, fascinating and rich in resources, including the largest springs and most productive groundwater on Earth and 175 different minerals, a few of which have only been found in caves. They provide a unique subsurface habitat for rare animals and preserve fragile archaeological and paleontological materials for millennia.

There’s so much to see, learn and discover underground. With publicly accessible caves located throughout the country, the objective of National Caves and Karst Day is to encourage people to tour at least one cave during the summer. Here five reasons why they should.

No two caves are alike. Sights on a cave tour include formations, millions of years in the making, such as stalagmites, stalactites, aragonite crystals, flowstone, and cave bacon. There are also many caves with water features, such as underground rivers, pristine lakes, and raging waterfalls.

Some of the best family memories are made during summer vacations and staycations. Exploring caves with kids not only means quality time together, it can spark an interest in science and nature that will last a lifetime. Bonding opportunities exist as well when family members share a challenge such as going deep underground for an adventurous wild tour.

“Most people don’t realize that when they’re out walking or taking a hike, there might be a completely different world beneath their feet. Even teenagers, who weren’t that excited about the trip to begin with, are amazed and want to go right back in for another tour,” John Graves, NCA President and President and CEO of Virginia’s Luray Caverns, explained. “Instead of more screen time this summer, get kids of all ages engaged in the natural world. No matter how many times you go underground, it’s different every time.”

Most guided tours teach guests about the history of that particular cave and the surrounding area, as well as its geology, the positive impacts of bats and the importance of cave conservation. There’s a lot more to learn about the scientific research that’s taking place in caves around the world. Universities are partnering with privately owned caves to learn how unique bacteria can play a role in cancer treatment and the development of new antibiotics. Researchers also collect broken formations to track historical weather trends dating back hundreds of thousands of years and take water samples to identify changes in mineral content.

There’s no limit to the ways that we can benefit by better understanding caves and karst. Astronauts train underground, and NASA is considering the possibility of using a cave to create a shelter on Mars so that only one exterior wall has to be constructed. Cave discoveries include unique species as well as fossilized bones, some dating back to the Ice Age. The list goes on and on.

4. Spending time in nature has many benefits.

These aren’t your grandfather’s cave tours. Options for exploring and spending time in caverns are increasing each year. Visitors can: travel on underground rivers in electric tour boats at Bluespring Caverns and in kayaks at Indiana Caverns, both in Indiana, or by floating at Natural Stone Bridge Caves and Park in New York; watch live concerts broadcast by PBS or camp out at Tennessee’s Cumberland Caverns; and listen to the Great Stalacpipe Organ, the world’s largest musical instrument, at Luray Caverns in Virginia. Visitors to the Sea Lion Caves wildlife preserve and bird sanctuary on the Oregon Coast often spot sea lions inside the cave, depending on the time of year.

Sometimes, just getting to the cave is fun. Access to Glenwood Caverns and the Historic Fairy Caves in Colorado is via gondola, with panoramic views of the Rocky Mountains along the way. In California, guests descend 150 feet by rope to enter the main chamber at Moaning Caverns, no experience required. A Lake Shasta Caverns’ California adventure begins with a ride across the crystal blue waters of Shasta Lake on a 65-foot catamaran.

More information about the National Caves Association and its members can be found at www.cavern.com (link to home page). 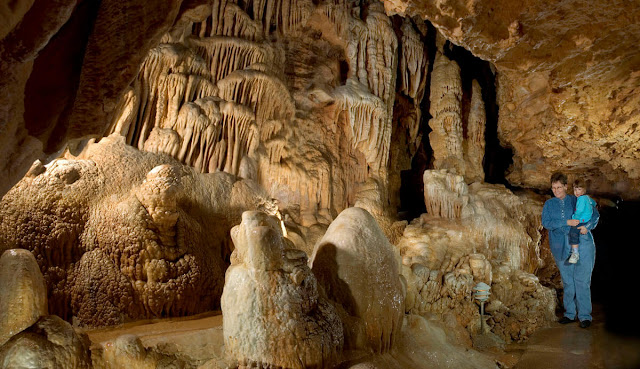